SAP BPC: How to choose among different versions

When it comes to SAP BPC, you can’t complain about the absence of choice. Having decided to implement SAP BPC is one. But then it suddenly turns out that since the new release of BPC 11.0 there are five different versions available for BPC nowadays. Making up your decision about what version to implement may cause you suffer due to the paralyzing surfeit of it. And even when you have already implemented BPC you may be facing that peculiar dilemma: should I keep using the current version or should I upgrade to a newer version?

In recent blogs, my colleagues already introduced the different flavors of SAP Business Planning and Consolidation (SAP BPC). In these blogs the following topics have been discussed:

Nevertheless, still questions arise from customers about the distinction between these versions and they ask what version to recommend. Unfortunately, most often the answer is not that straightforward. But I found out that in having these discussions, customers find it helpful to get some background about (a) why there are different versions and (b) how these versions relate to the SAP Business Warehouse function (SAP BW) and SAP Enterprise Resource Planning function (SAP ERP) that is in place at the customer site.

Therefore, in this blog I’ll further position the different BPC versions among the BW and ERP applications that are in place to give you a good understanding of how different versions fit depending on the application roadmap of your organization. Based on this understanding, I’ll give some general guidelines for selecting the appropriate BPC version.

But first, since it is necessary to have a good understanding of BW and ERP, I will do a short recap of the functions of these applications.

2. Get rid of data silos: integrating BPC within SAP BW and SAP ERP

Having so many BPC versions available nowadays is foremost the result of the strategic roadmap of SAP itself: namely to get rid of data silos and to integrate data. This way SAP will meet business requirements for having ‘one-version-of-the-truth’ and processing data ‘real-time’.

The original version of BPC (‘BPC Standard’) functions as a ‘stand-alone’ application so that you can implement it without having to consider your company-wide application’s roadmap. With the new versions, BPC has been integrated within SAP BW and SAP ERP. As a consequence, your choice for a BPC version highly depends on the use of these applications within your company.

Since BW and ERP are not owned by Finance departments and are in essential company-generic applications, you as a financial may not have a full understanding of the purposes and the functions of these applications. It’s therefore worth to do a short recap. In Figure 1, I have summarized for each application its purpose and its function.

For the purposes of this blog, some of the functions are worth to highlight here:

As stated earlier, with the introduction of new versions SAP focuses on the integration of BPC with two other applications: SAP ERP and SAP BW. The selection of a version highly depends on the use of these applications within your company.

In Figure 2, I’ve positioned the BPC versions against the BW and ERP version that is in place. I have differentiated between the traditional versions (BPC Standard NW, BPC Standard MS), more recent versions (BPC Embedded, BPC Optimised for S/4HANA) and most recent released version (BPC 11.0). Depending on your version of BW and ERP, there will be one or two versions of BPC that suits you best. 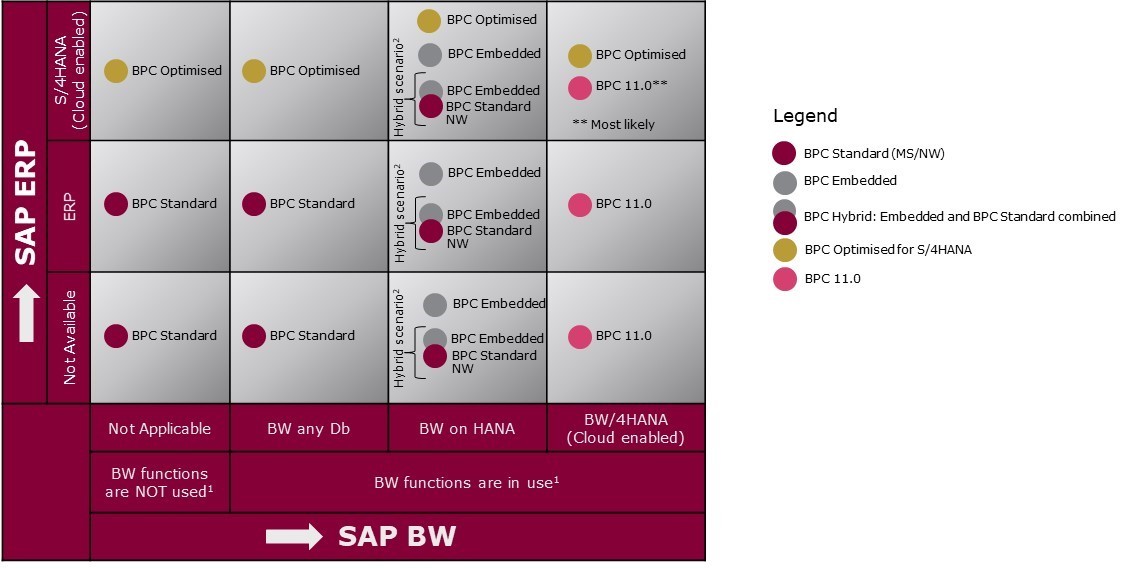 1 Technical note: any installation of BPC requires an installation of BW. A determinant in this matrix is therefore not the presence of BW, but the use of BW functions.
2 A hybrid scenario means ‘combining best of both worlds’. A hybrid scenario is common in case when for some business use-cases the BPC Standard version fits better than the BPC Embedded version and vice versa.

You may wonder what the difference is between these BW and ERP versions. I will not go into detail on this, but since SAP has developed its own proprietary in-memory database, called HANA, they are focused on increasing the performance of the BW and ERP applications. Each newer version has become more deeply integrated with SAP HANA, resulting in a significant increase of performance. BW/4HANA and S/4HANA are now the most innovative, recent released versions of BW and ERP respectively.

Next, note that S/4HANA also comes with SAP Master Data Governance (SAP MDG). It supports in keeping master data consistent for your wholesystem landscape. MDG enables you to adjust your master data (for example company codes, account codes) quickly to reflect legal changes and respond flexibly to new requirements and to business transactions such as takeovers of other companies. MDG also enables you to track changes made to master data. Since we experience that companies are often challenging to keep their master data consistent, it’s a worth feature of S/4HANA.

For you, the existence of different BW and ERP versions does influence your choice for a version. SAP is putting all its development efforts on HANA and it is optimizing its BusinessObjects suite (like Analysis for Office, BO Cloud, and more) for the most recent versions, BW/4HANA and/or S/4HANA. Sooner or later every organization is willing to adopt these latest versions over the existing ones, logically followed with a migration to BPC 11.0.

So, you are not done yet by identifying the current versions of BW and ERP that are in place: you need to get to know your company’s future roadmap. If SAP BW or SAP ERP is not yet in place, is there an organizational need to implement a BW-function or to replace your existing ERP-system for SAP ERP? If BW/ERP are in place than you may question: how soon is your company moving from ‘classic’ BW and ERP towards BW/4HANA and S/4HANA?

I have summarized some main considerations for implementing or upgrading SAP BW and SAP ERP (see Figure 3). 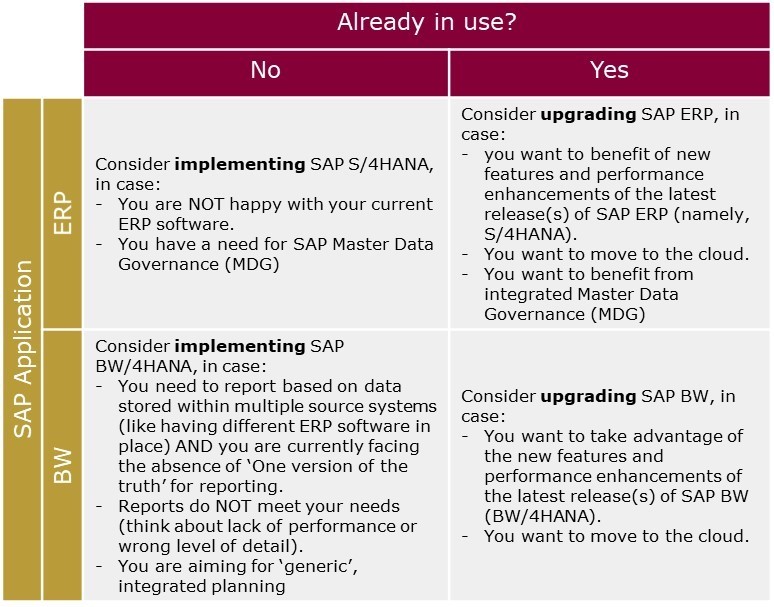 What we conclude from the above is that it’s not that simple to select a BPC version that suits your company best. Which questions need to be answered, at least?

Some common functional differences between BPC versions are already discussed in a recent blog.

What are your requirements with respect to performance?
One of the main benefits of the most recent versions is the significant increase in performance of BPC. Since most of the calculation logic has moved to the database layer instead of the application layer, the BPC Embedded/Optimised/11.0 versions perform must faster or even real-time. If performance is a critical factor, a newer version fits best.

What is your company’s DNA?
While BPC standard versions have reached their ‘maturity stage’, newer versions are still in development and more prone to bugs.

So, here it comes down identifying your company’s DNA: is your company generally innovative, one of those first-movers who is willing to accept (small) bugs in software? If not, you may prefer one of the standard versions that have been proven themselves already. But be aware here, SAP currently plans to phase out the standard versions (called ‘End of Maintenance’) by the end of 2022.

What is the company’s application roadmap for BW and ERP?
If you don’t use SAP BW or ERP yet, it might be worth to consider to implement it. You can review some main considerations in Figure 2. If there is no need for both BW and ERP, there is also no need for integration. Then, the BPC standard version is the best option.

If you have BW and/or ERP: One of the most important considerations in selecting the appropriate BPC version, is defining your needs with respect to integrating BPC within BW or ERP.

The original version of BPC (‘BPC Standard’) works as a ‘stand-alone’ application. As a result, you are flexible in defining model dimensions and creating master data (for example accounts and its properties). Two disadvantages of this approach are that (1) you’ll have to maintain dimensions and masterdata both in the source system and in BPC and (2) updated figures within the source system are not directly (real-time) processed to BPC. One big, often appreciated, advantage of this approach is that the financial department can own and maintain BPC by themselves and don’t need any IT involvement when changes in models or master data need to be applied. So, from a business perspective are the BPC standard version more ‘flexible’.

If you have an older version of BW and/or ERP, you may have to review the roadmap for it. Since new versions of both BW and ERP have been released (namely 4HANA), it’s worth to define a roadmap for upgrading your existing versions. Depending on this roadmap you can decide when to implement what version of BPC.

What is your budget?
Like for any other implementation, the question is what resources can be freed? For new implementations of BPC, implementing a ‘newer’ version over the ‘standard’ version will generally consume more resources. For these reasons:

Even upgrading from a standard version to one of the newer versions has a major impact: the existing solution needs to be rebuild and people need to be trained new skills.

6. Making up your decision

I hope you got a better understanding about why there are different BPC versions and that you have some better thoughts about what version suits best to your case. Making up your decision when choosing among these versions is, unfortunately, not that easy and you’ll have to take a lot of factors into account. In this blog, I’ve limited myself to some key-points. If you are at the point of selecting a BPC version and need some support on that, feel free to contact me or one of my colleagues. 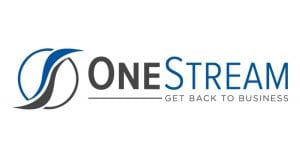